GYMBOX for children with special needs

By: Dana Azulai
Developmental accompanier in the Verdi method, Hydrotherapeutic yoga guide for young ages.
A mother of two children with special needs.

The recognition and understanding of the different body
parts at the time of their movement against a fixed space
and a changing space. It is important to initially check the
level of body awareness, the reason being that if it’s
lacking, one of the systems we’ll work on may cause
frustration.

Laying out a sheet on balls in a GYMBOX pool, laying the child on his
back in way that the feeling of the ball’s curves enhances
the awareness to back part of the body, in the front part we
start with the contact.

We start with a slow and deep contact, we pass all over the
body from the feet to the head, every part is touched deeply
for a couple of seconds (without forgetting to state the part
we’re touching) and then released, and then we go on to
the next body part… soles, legs, knees, belly and chest,
hands etc…

We’ll pass over the body parts with which we want to
stimulate sensory feelings with the help of sensory objects
such as brushes, sponges and certain ball objects. 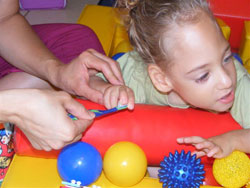 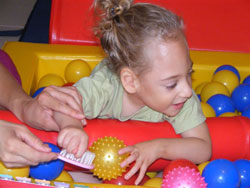 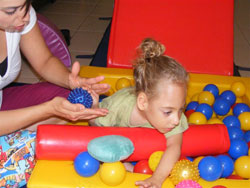 With this system we cross the middle line, afterwards we
conduct rotation (separation of upper body and lower body
with a semi-circulation of the body) which enables us to
turn over the child.

In many cases we’ll discover that unlike with normative
babies, children with disabilities have difficulties with
crossing the middle line and conducting rotations. Most of
the movements are involuntary and accompanied with
tension and an enhanced tonus. Other movements such as
turning-over or crawling are conducted as one piece and
with great effort, movement planning isn’t always existent
and therefore many times the movement ends with
frustration and crying.

Exercises: Handing out toys/balls in a challenging way:

We’ll lay them hanging above the body center in a way
which will give them no choice but to bring the hands close
to the body center.
Handing over the toys diagonally while encouraging the
opposing hand to extend in the game’s direction.
Stretching the body in rotation, shoulder and chest are
stretched to one side and the leg-hips to the other side.
We’ll put the children in the GYMBOX in a sitting posture.
In the GYMBOX we’ll add balls and even use supporting
cylinders for children who are sitting bent-down or have
difficulties sitting. We’ll hold an empty box behind the child
and ask him to fill the box with balls from the pool in a way
that they’ll have to rotate in order to turn around and lay the
balls in the box. 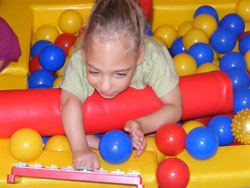 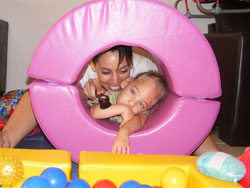 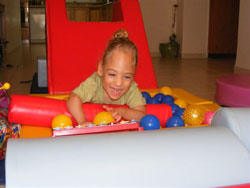 The balancing system has an important function even if the
infant/child can’t walk.
Children with a problem in this system experience every
movement change (especially rotational movements like
turning over) as a difficult and even frightening episode, in
order to mitigate this feeling this system should be
stimulated gradually.
In the GYMBOX there are many pieces and parts which
can serve us in our purpose:
The ‘mushroom’ should be used, it would be laid on the
belly and we would gently tilt it sideward’s while mildly
supporting the child’s body, simultaneously the child is
supposed to make an effort in order to hold his body
contrary to the movement.
The too halves of the purple circle can be attached into one
circle with a hole, the child would be placed with half his
body inside the circle and we would tilt the circle from side
to side with the child in the middle. A game can be handed
to the child at the same time. 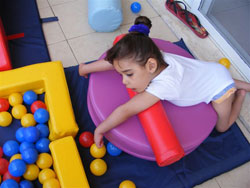 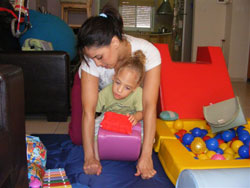 Strengthening of the shoulder belt, the arms and the upper body:

It is recommended to use the GYMBOX’s cylinders and the
slide’s slope.
We’ll tuck a little cylinder under the arm pit in order ease the
load on the chest while laying on the belly so that the arms
would be more available for playing.
A bigger cylinder will be used in order to roll the child while
holding his/her feet or hip during the rolling-over (forward),
we want the child to send his hands in the forward direction
and to lean his body weight against them 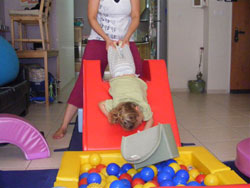