Examples for exercises that will help you, the parents and care takers, to reach the full potential of the GYMBOX.
The parent is responsible for the correct performance of the exercises.
No exercise should be attempted without the will and the cooperation of the infant.
All the precautions that are specified on the label that is glued to the product must be followed.
It is forbidden to play with the product or climb on it without adult supervision.
While in use, the GYMBOX must be placed on a carpet or soft surface

During this period, babies continue to develop their movement skills.
Enable them to have a variety of room to move and encourage them to switch between different modes of crawling sitting standing and walking.
Be sure to explain to the infant the activities you perform and which are required from him, call them by name, encouraged him to imitate you.
Later let him do the exercises on his own, while you standing next to him and ready to help and to catch him.
Every baby has a different development pace; it is recommended to start with exercises offered to the age of 6 – 12 months.

Exercise No. 1
Put the child into the pool and show him with a hand how you move the balls in different directions (Forward, backward, left and right). Encourage him to imitate you. Help him do this activity within changing hands and then try to do it with both hands in swimming
movement

Exercise No. 2
Help the child to stand in the balls pool and to move the balls from one place to another in all directions deliberately (with his feet, forward, backward, right and left, in circles).

Exercise No. 3
Pass the ball on the various body organs of the child, and allow him to feel different Sensory contact, and recognize the limits of his body, indicate the names of the organs (Hand, foot, belly…) Take a ball and put him under the shirt of the child so he can experience a different sensory contact.
See which way he chooses to take the ball off his clothes

Exercise No. 4
The balls have different colors; use the balls to teach the child the names of the colors, by means of a game and different requests (such as: show me the red ball, throw out of the pool the yellow ball, in a later stage, count together with him the green balls, the blue balls, etc. )

Exercise No. 5
Put together rolls and half rolls / cubes in different ways and create routes encouraging crawling / walking facing the pool. Encourage the child to pass then: crawling, sitting or walking. Later, add different requests to bring you balls in different colors. Refer to the different shapes of the elements of the Gymbox: a roll, a cube, etc.

Combining various options to enter and exit the balls pool encourages crawling and later walking skills.
After they have learned to walk it is very important to increase the confidence and the stability of the children. Playing in the balls pool contributes significantly to the strengthening of legs and arms muscles and improves the coordination. Exercising different forms of walking and also jumping on one leg or both legs in different directions. Development of basic concepts, familiarity with the names of the colors, shapes and the count ability: up, down, forward, backward, left and right, red, yellow … counting balls in different colors. The game with balls allows multi-aged games that connect socially the children of different ages. 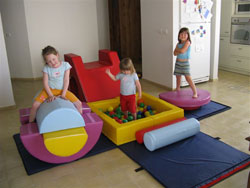 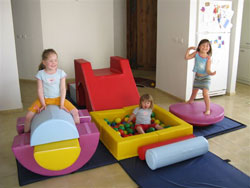 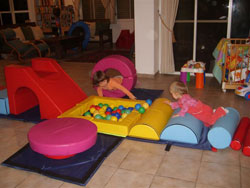 Exercises to the balance

Exercise No. 1
Lie on stomach and swing back and forth so that once the hands touching the floor and once the legs. You can place the swing by the pool and dive into it.

Exercise No. 2
Put the child on his stomach (later ask him to do it) and help him to rock from side to side and raise one hand at a time.

Exercise No. 3
Help him to roll the belly to the back and vice versa. And later ask him to raise one arm toward the ceiling and to turn to the side.

Exercise No 4
Help him to sit in a riding position while his legs are on both sides of the yellow roll and to swing from side to side.
By himself or with a friend.

Exercise No. 5
Help him to sit with his feet lying on the on the swing, help him to stabilize himself by spreading his hands.

Exercise No. 6
Turn the balance swing over (half a yellow roll and two halves of the pink circle) and add above it a pale blue roll.
Lay the child down when his chest is leaning on the pale blue roll and help him to roll toward the balls pool and later ask him to get a ball (every time a different color).

Exercise No. 7
Help the child to sit on the surface and to maintain balance while moving the body forward, backward and sideways. Initially when you hold his hands and later with his arms outstretched and you are standing beside him and ready to help him. It is recommended to start his exercise lying on the surface and then move up to the sitting position.

Exercise No. 8
Hold the hands of the child; help him to stand on the surface and to pass the weight from one leg to the other.
Later help him to swing on the surface, initially while you hold his hands and later when his hands are outstretched to the sides and you are standing beside him and are ready to help him.

Exercise No. 9
Seat the child in a riding position while his legs are lying on both sides and his hands are on front. Show him how to swing back and forth while transferring weight to the hands. Sit beside him and encouraged him to do so on his own.
.

Exercise No. 10
Help the child to lie down in the circle and roll him gently. Show him how he can roll by himself. Initially while transferring the weight from side to side and later a whole circle.

Exercise No. 11
lay him gently down on his stomach on the circle.
Hold him and roll him back and forth

Exercise No. 12
Show the child how he can use the circle as a hoop and to thread his body inside standing up.

Balance exercises from different heights add challenge and interest to movements already experienced at a younger age.
Balance and maintaining balance in different development levels. Children that are still crawling will find a challenge in climbing up and down from a wide and moving platform. Children who have learned to stand and to sit have the chance to experience it on a unstable ground

Exercises to improvement of walking skills and coordination
Half pink circle connected to a whole circle, the circle is lying on the floor

Exercise No 1
Practice with the child the entry and the exit from the circle.

Exercise No. 3
Seat the child inside the circle and later ask him to do it by himself and play with him passing and catching of small balls from the pool / a bigger ball.

Walking over the half circle / roll is challenging. His instability requires the child to plan and organize the movement of the body depending on the shape, height and stability of the various parts.

Blocks (steps) slide (slope to the climbing and crawling)

Exercise No. 1
At this stage the children can derive great pleasure from sliding without the help from the parents. Most of the children sit stable and can slide on the bottom, or lie on the back or belly. Offer them to climb the steps and to roll into the slide.

Exercise No. 2
Climbing on the slide from the direction of the pool is still challenging and joyful and can continue up to the decline with the hands toward the cubes (used as steps) and from there to the floor, or directly to the floor.

Climbing, declining and the progress on the steps and the slide is very challenging and requires from the child to organize the movements of his body according the various heights what contributes to the development of the movement skills and the coordination.

The GYMBOX enables the creation of diverse and challenging movement tracks. By the time the children feel more confident and their movement abilities are comprehensive, you have to encourage them to move forward and use the various Gymbox tracks and create their own challenging tracks

Exercise No. 1
Create various movement track consisting of Gymbox tracks and encourage the child to pass them.

Exercise No. 2
later, toward the age of two years, offer them to create their own track, praise
them for it and ask them what the track is , from which parts the track consists and how it should be passed (use terms such as cubes, roll, up and down)
.
Exercise No. 3
Remove the different Gymbox parts and use the sports mattress to teach the child different gymnastics exercises: roll forward, roll backward roll, roll to the side, etc

Exercise No. 4
Create various movement tracks and various passing passages using the different Gymbox parts. Leave space between the different parts and offer the children to pass them. The child will have to go up and down, help him with the hands. Later when the child is goes well, encourage him to do it independently while you are always standing by his side and ready to help him.

Exercise No. 5
Build together with the child structures from the rolls that stand one next to the other like a house, a bridge. Offer him to pass below. Of course you can add blocks (steps) and other Gymbox parts.

The GYMBOX enables the creation of diverse and challenging movement tracks.
By the time the children feel more confident and their movement abilities are comprehensive, you have to encourage them to move forward and use the various Gymbox tracks and create their own challenging tracks. It is recommended to integrate the various Gymbox parts in creation of different and various movement tracks and allow them to be exposed to the challenges and coping with obstacles and changes.
In a later stage the children will create different tracks and use different GYMBOX parts to the building of conditions that encourage independence and self confidence and developing imagination and creativity.
The GYMBOX constitutes a multi-aged play environment – it is recommended to encourage them to play with other children, what helps to the development of social skills 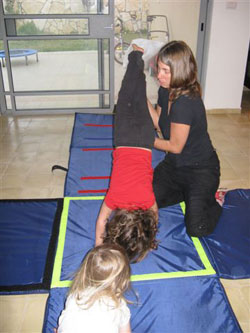